Quiz: What Your School Lunch Revealed

Its time for another quiz. A quiz about our immature years.

this doesn’t have anything to do with this post but this someecard is just brilliant.

Don’t worry, its not a lame Cosmo quiz or the kind you get in school although there is mention of school in this post so brace yourself.

If you had: Lunchables…..

At the time, you were really excited about this, but now you look back as an adult and realize that the Lunchable varieties became increasingly questionable with each successive incarnation. You basically mocked the idea of pizza by spreading an overly salted pizza sauce over a pathetic cracker with a plastic stick that that looks like it was stolen from the handi-snack packs.

It was only a matter of time before anti-childhood obesity groups and health advocates stormed the Lunchables bastille in the name of all things saturated and salty.

If you had: Sunny D

Wow, you your taste buds were in some kind of comma.

I never understood the Sunndy D commercial when the kids were all being active and ADD and then run into the kitchen to open up the fridge and they yelled:

“What’ve got in the fridge?! Oh, we’ve got some expired milk, grape soda, gravy, wheatgrass juice, and SUNNY D!!!!”

Yea, moron. Of course Sunny D will be a better choice than all those things. Sunny D tasted like cough syrup and if you got some in your lunch, you either had parents that didn’t know any better or your taste buds were asleep.

If you had: Leftovers

If your lunch contained chicken parm or lasasgna that your parents made for dinner the night before, congratulations, cause you were probably me.

“Here, Eden. I was also too cheap to get tupperware but at least these will take the shape of your cubbie nicely!”

I was totally that kid with parents too lazy and non-American to bother putting peanut butter and jelly on some bread no matter how many times I begged. Having such werid fancy food that was cold got me a lot of eye rolls from my peers and totally useless lunch-trading goods.

You never had to worry about being picked for kickball or scoring another desirable item from another kids lunch.

Because if you had Koala Yummies, you reeked of coolness. You had everyone’s attention and affection. You knew that a fun and sweet snack was way beyond fruit roll ups and gushers. Koala Yummies were quirky yet not cloyingly sweet. They were gold when it came to trading. But why on earth would you trade a cute, delicious, and chocolate filled delight? 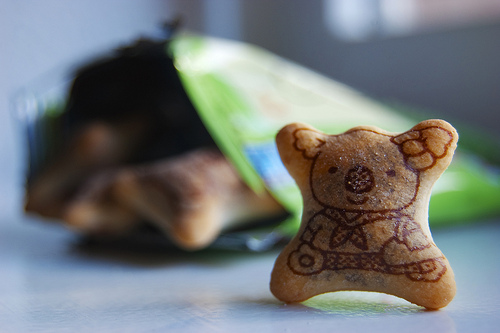 So cute, you almost don’t want to eat it.
Nah, totally kidding, you could easily decapitate those bears.

If you had: Capri Sun

Your parents bought into the whole “all natural” marketing scheme only to be fooled by the hilarious sugar content that made these pouches essnetially liquid crack for children. If you were lucky to actually get that yellow straw into the silver pouch, your were probably revered by your peers as some sort of wizard.

(kind of unrelated: you were also probably captivated by the Alex Mack rip-off commercials in which active kids morphed into some silvery form of the juice.)

If you had: Carrot Sticks

You were deprived of the luxury of having  goods to offer for intense negotiations around you at the cafeteria. \

You secretly wish those carrot sticks would be Cheetos one day and you’d often close your eyes as you munched on raw healthables and imagine with was Cheetos or any chip.

But it wasn’t and you felt like a rabbit.

On the bright side, very pretty eyes.

What did you have in your lunch as a kid? If it wasn’t on my list, what do you think it said about who you were?

i used to have lobster pate sandwiches once in a while. Sounds yummy now, but it wasn’t a cool thing to bring at school. I would usually get weird looks my way… Also, my parents never really bought pre packaged snacks very much. Looking back, im glad they did, but i was always jealous of all the kids with cheese strings and froot roll ups.

OMG when I was little my mom used to pack me “healthy” foods… SO NOT POPULAR! She would toast an EZEKIEL bread bagel and smother it with natural peanut butter or… *GASP* tuna fish!! Now may I remind you I was about 10 years old when she would do this, so come lunch time, my friends would all be like “ewwwwwww what’s that smell” and of course when you’re that young, you start to get self conscious! So I would always throw away the lunch and ask my friends for 1/2 of their sandwiches and popcorn and cookies! My teachers caught on though and made me eat my food in the classroom under their supervision! But when it was PIZZA Friday, I always “stole” $1.50 from my mom or dad because I wanted a slice instead of the nasty bagel! LOL!!!!!

Although I love tuna salad, its NOT ideal lunch food. Its up there with broccoli and cauliflower and foods that smell terrible but taste good.

I totally must have eaten koala yummies as a kid. It makes sense, koalas are my favorite marsupials and I am pretty cool. Win win situation.

As for the capri suns, it is as close to crack as possible. My BFF gives her little girl a capri sun every once in a blue moon and the girl is squeezing and drinking it as fast as possible while shaking. It’s hilarious.

I think I have pretty standard lunch food. A sandwich, some pretzels or chips and a piece of fruit. Not bad. Except for the daily struggle of taking out your retainer and concealing it in your lunch bag and NOT throwing it away. Awesome.

I had kind of standard lunches (sandwich, carrot sticks, chips, maybe some grapes or apple slices) but the thing that I always got made fun of for was the fact that my mom packed EVERYTHING in plastic wrap. Never a baggie. I mean everything. Including carrot sticks or a pickle. And she wrapped it tight so I was forced to wrestle with it for a few minutes.

she could’ve tried wrapping the pickle in a condom.

This is pretty close, pickle in a pouch: http://www.vanholtenpickles.com/

Pickle in a yard of plastic wrap. *puts up hand* No carrot sticks, just a nub of carrot hacked off at its middle (bitter and unpeeled), a bruised apple or flaking orange (not because we couldn’t afford fruit but my father refused to throw the stuff away), and sometimes a half dark pumpernickle, half white bread sandwich with margarine and sweaty, mild cheddar. My lunches were the stuff of legend. They mostly lived (and died) in my locker.

In elementary school I ate healthy lunches that my mom packed, but in high school I insisted that I live off of Sunny D and pizza pops, lol!