Foods Least Likely to Get You Laid

Its the last day a February.

Meaning any posts about love and valentine’s day is even more tacky after tomorrow.

So as a goodbye to February, I thought I’d post some Valentine’s Day rejects.

Think of it as the “anti-aphrodisiac” or foods least likely to get you laid.

Personally, getting me any kind of soap turns me off. I hate those smelly bubbles and soap. I like plain old, anti-bacterial, unscented soap.

And the LAST think I want to wash myself in something that resembles fecal matter.

You know, this seemed totally disgusting at first, but after that whole strawberry poo soap, this seems tame. Plus, bacon is involved.

It won’t get you laid, but I won’t downright reject you for it.

Eastern monks use cilantro (or, as it’s called outside in places outside of the US, coriander) because they believe it curbs their sex drive.

Whether you believe this or not, if you eat enough of the cilantro, raw onions, beans, and guacamole at Chipotle, it’s gonna do SOMETHING to your libido. 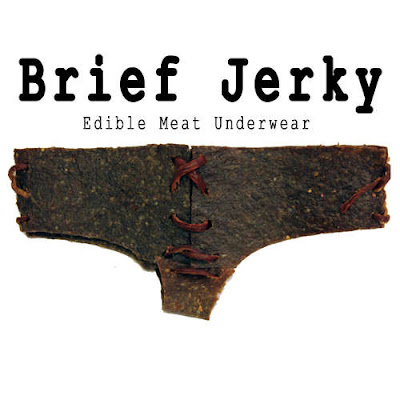 Don't be a jerk and eat my underwear!

Cause, you know, edible panties are just soooo carby these days. Why not make them high in protein?

For the simple reason that dieting is unsexy. Plus, you cant be malnourished and have a good sex drive.

Sadly, I used to live off diety food so you can trust me on this.

Plus, according to a Yahoo Answers question about turn-offs:

“Tuna noodle casserole!! My husband hates it and knows that if that’s what he is eating for dinner he has pissed me off and isn’t getting any.”

If all else fails, remember getting laid means a possibility of a baby.

What foods turn you off in the bedroom? Any foods you do find sexy?

And….did you enter my giveaway and vote for my blondies.

You can totally hate me for being annoying about it. But dammit that other chick is winning!