How To Be Terrible

As I do more and more stand up comedy, I’ve come to learn that you need to get used to being terrible before being fantastic.

But as I reflect on my life thus far, this is true about most things:

Babies wobble around like drunks before they can walk.

When I was in school, I spelled my name with a backwards “D” until I was in second grade.

When I was in culinary school, I made what looked like curdled sour milk before I mastered the art of making a proper hollandaise sauce.

And as a comedian, and even a comedy writer, you’re bound to be unfunny, inarticulate, and make other people embarrassed for you. When I first started, I was convinced I was just THE WORST. 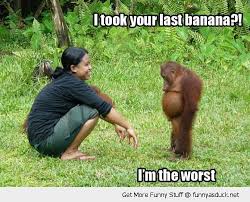 And this is where people tend to get caught up.

I think there’s a graceful way to “be terrible” and I thought I’d share them with you. I hope that no matter what your ultimate goal is, that this helps you accept failures and help you feel better about yourself in general.

Denial that you have weaknesses and vulnerabilities just makes you even more terrible.

As I mentioned in the intro, most people are terrible at some point when they take on goals. But thinking you’re the best and being unwilling to learn will deter your growth. Plus, people around you will sense this and this might make you look like a dick. Not that you should give a shit of what people think of you, but its good to be on good terms with people as they can offer their advice and help you succeed.

Accept that you’re terrible, but don’t tell people that.

That will only make you look bad and it’s a sort of self-depreciating move that people will often use as a way to fish for compliments.

3) Talk to Other People About When They Were Terrible

One of the most motivating things I do is Google old sets from comedians that are now huge. It reminds me that even they didn’t start out with killer sets.

And talking to other people about their failures helps too. We trade stories, advice, and you feel like you’re really no different from anyone else. 4) Remind Yourself That You Can Be Amazing
I did a stand up set about two months ago that was really terrible and completely humiliating.

But I mustered up the courage to keep at it by reminding myself that I have done amazing in the past. I have it in me, I’ve done it before, and I can do it again. Everyone has it in them if they have passion and motivation. We’re allowed to be amazing and we’re allowed to be terrible, because we’re human.

Cue picture from set where I was really amazing:

Dragons AREN’T human hence they pretty much need to be amazing all the time!

What do you do when you’ve “been terrible”? Whether on stage like me or in your career or other passion? How do you deal?

You’re not terrible until people say “that’s not funny” during your set and come up to you after the show and tell you how bad you are. Those people are usually Danielle Roz’s relatives.

Keep at it! It would be so easy to give up and do something else, but just like you said, it takes time. I’m rooting for you

Thanks! I’m actually not feeling as discouraged lately cause I’ve done pretty well these past couple of sets, but this industry is so competitive that it helps to know there are people out there rooting for me. Even half way across the country

I like to ask myself how I would feel if this was the last day I lived, and it always might be. That gets rid of a lot.

As Eddie Murphy told Charlie Murphy…”You think Richard Prior got laughs every set? You think your better than Richard Prior?” Or something like that…point being is even the best suck when they were learning, it takes time!

That’s awesome you are still doing all the stand-up. I’ve been doing it here and there and it’s either amazing or terrible it seems. I’ve been doing a ton of improv though and since it has had a regular presence in my life I’ve gotten less scared of failure, since I know another show, i.e. another chance, is right around the corner…

if someone makes me feel terrible I think it over and if they are being mean etc I will give them finger. no one has the right to stamp on your ambition. glad your back lady

Please please can we get a video of your stand up at some point??? I want to hear!

I’m building a seperate site for my stand up, I’ll post some in there

Previous post: What I Hate About Trader Joe’s In Gifs