Halloween Candy: What You Pass Out Says About You

We beg them not to, but warning people “don’t judge” is basically an invitation to do so. Since Halloween is coming up, let’s assume that you actually put a whole lot of thought into the type of candy you hand out to kids. And then let’s judge you on it.

I mean, just like sexy costumes, the type of candy you pass out says a lot about you.

careful now, you might break a hip just trying to bite into it

Are you over 80 and shitting in diapers? Save these for waiting rooms and for the the porcelain dishes at the homes of octogenarians.

Raisins (or some other dried fruit)

Ok, even as a kid, I admit I loved prunes. But come the fuck on! Were you out of pennies or something?

I get it. You're rich. Either that, or you work at Costco.

I bet you were the teacher’s pet in school. Now that you’re an adult, you just HAVE to be the neighborhood’s favorite and prove you’re wealthy, don’t you? You want to be  the “popular” house: the house where kids from seven suburbs away make their parents drive to your neighborhood so they can score your loot. After all, kids are shallow. They don’t love you, they love your candy. But heed this warning: most parents will hiss at you for trying to make their kids obese and for being such a brown noser.

Maybe Martha Stewart is your idol. Maybe you’re a food blogger and this is a “project” for your next post. Whatever the reason, giving out homemade treats is a surefire way to find those treats in the garbage November 1st. Not only do you seem like an over-achiever by the other parents, your handy work won’t even get eaten. Might as well go the Mrs. King-Size-Candy route. Or better yet, just give it to some drunkorexic college students. They won’t eat it anyhow. 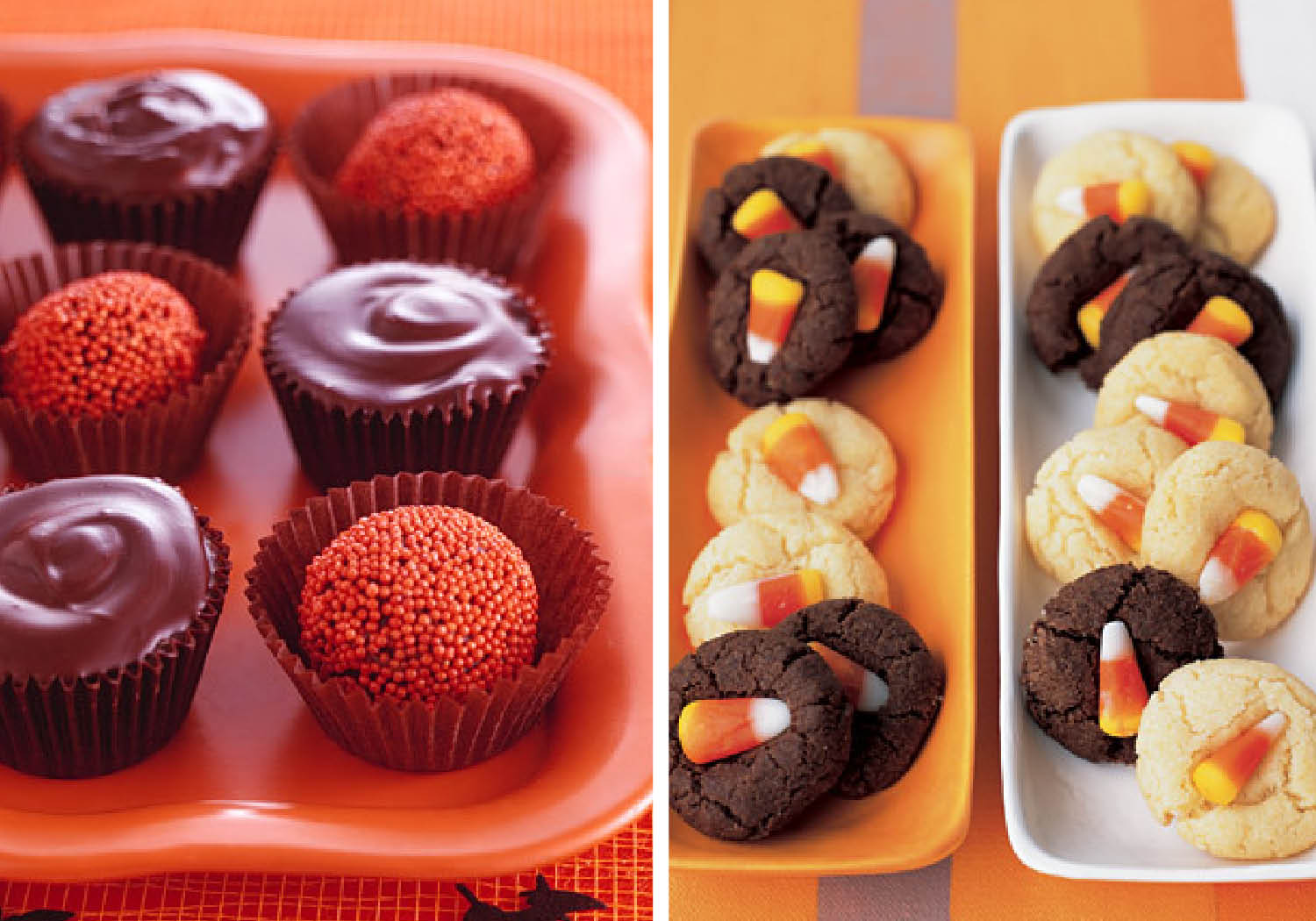 You or your husband is a dentist/orthodontist. You should not be allowed to celebrate Halloween if they’re going to get all tooth doctory on us. Complimentary bristles on a stick (as opposed to Milky Ways or Twix) will not encourage us to brush up. Besides, don’t you WANT us to get cavities? Thats more $$$ for you! 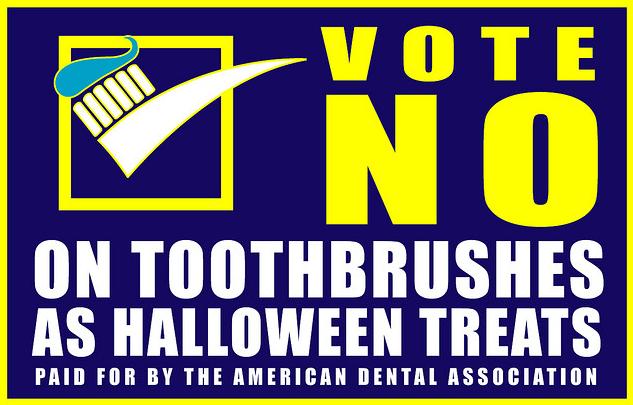 You were too lazy to go out and get candy, and this is the closest thing to candy you’ve got laying around the house. You boozer. AA called, by the way… 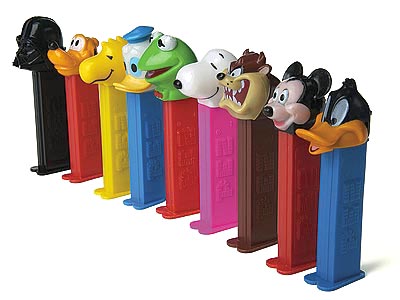 You’re pretty much awesome. Retro, yet contemporary at the same time. Plus, you provide a free contraption. And lets not forget, everything tastes better when eaten out of a neck of some character.

Anything you want to add? What candy do you give out on Halloween? Whats the worst thing you ever got?

when I have given out candy, I always buy things I like (in case of leftovers and snacking…) so peanut butter cups, anything chocolate and caramel.

one year I had cases of toothpaste (leftover from a promo at the spa) and I had given as many out to my family and friends… I needed to go get candy for the trick or treaters, and cannot believe I actually thought of handing those toothpastes out… luckily Jason was smart and told me no.

jason will always save the day!

PS I still love you Kris, even if you are hatin’ on the smarties

not ALL smarties, just the candy.

Worst candy is the peanut butter taffy called Mary Jane. It gets stuck in your teeth plus the peanut butter isn’t really real. It tasted worst than the PB2 “Powdered Peanut Butter” that all the “healthy bloggers” rave about instead of eating real peanut butter, which in my mind tastes delicious in all of its full fat gloriousness.

PB2 is like a honeymoon without sex. No fun.

My mom’s a dental hygienist, so you can already see where this comment is going….we used to hand out toothbrushes and carrots. YUP, we were THAT family. Shamed, I hid away in the back closet all night.

(not really – I was probably doing homework or something)

My friends dad was a dentist and had the brilliant idea of just handing out coupons for a cleaning!

halloween is my bday so it was a big deal about what my costume happened to be that year and also i got to choose what candy we gave out to our neighbors. i was always a fan of the mini milky ways, resees cups & snickers bars. i would get really upset at houses that passed out candy apples. it was a chore for me to scrape the candy off the fruit

Oh lucky you! I’d send you some candy apples in the mail just to piss you off!

I hated getting fruit or homemade stuff. And agree that MaryJanes were the worst along with the Special Dark bars, Jujubes and Dots. Those last two got stuck in my teeth.
I loved getting caramels, fireballs, gum, BitOHoneys (yeah they’re sticky too but I loved the taste!) and Sugar Daddy’s/or SloPokes.
We don’t have trick or treaters where I live now but we used to buy the giant variety bags at Sams with candy bars, gum, LaffyTaffy, tootsie rolls/pops, Bottle Caps, Sweethearts, etc.

ugh, I HATE dots! they are so pointless. No one likes them. Find me ONE person thats like “OMG I love dots!”. It just doesn’t sound right!

I think the worst candy ever are Tootsie Rolls- GROSS; like what the hell are they even made of and what a waste of candy-eating!
When I’m super rich and successful one day I hope to hand out Neuhaus truffles or something to my little trick or treaters

This post goes to show you that one man’s pleasure is another (wo)man’s pain. For example, I LOVE smarties, PB candies of any kind (even the fake tasting kind) and TOOTSIE ROLLS- in fact I go to Smart & Final and buy the huge bag of the teeny tootsie rolls and they last me all year- eating them daily. So really it’s very subjective. We often give out whatever we have on hand as we always have loads of candy in the house. We get very few trickortreaters, but of course the year that we get nothing is when they come on busses and ring the door bell repeatedly despite the lights being off and us cowering in a closet (not really). I’ve never once given out a toothbrush.

Yeah, raisin suck and they are just as bad for your teeth as laffy taffy.

And whatever happened to the razor-in-the-candied apple scare that started when I was a kid? I guess it’s progressed to injecting drugs or poison by now. That would be a reason not to eat home made treats.

thank goodness you weren’t “that kind” of dentist! But I would expect you to be the cool dentist and give proper treats. You reek of coolness.

Aw shucks. I wonder what I was gonna say when I said “but yeah”

I loved the King Sized houses! They were the best. Hated the pennys. Hated the apples. I can’t believe my parents allowed me to gorge on my entire stash before bed, though…looking back it seems that was some poor parenting on their part. It was the 80′s – early 90′s so we were not afraid of sugar back then.

PENNIES! ugh, my spelling is so bad, it’s beginning to depress me.

Like the other commenter above, Halloween is my birthday too. My mom always trained me to say “Trick or treat, it’s my birthday.” in attempt to get more candy…it usually didn’t work

I still go trick-or-treating (I’m 18) because I have nothing better to do and I look about 12 so it works out. I make sure to go with younger kids as well to all the rich houses.

I only like Reeses and Almond Joys so the rest of the candy I sold, ironically, to a dentist. Not only do I get free candy, but a profit too!

Who would have thought the 31st was such a popular birthday!
I stopped trick or treating when I was 14. People were like “youre too old, go do the SATs or something”

LOL, we give out full sized chocolate bars … but it is because we only get about 5-8 kids!

Oh god, toothbrushes…that’s hilarious. I’ve never lived in a city where i could trick or treat or where trick or treaters would come to me. I always wanted them to come to my house. Maybe one day. And I’ll hand out sweet potatoes…it’s nature’s candy bar.

This is our first year celebrating at our new house on our own, so my husband wants to go all out with the king size bars. And yes, he totally wants to be that house.

I really could care less…I mean the Jew in me wants to save the cash, but we have no idea how many kids we will get and if we have leftovers my husband says he’d rather have the big bars.

When I was I was kid I always love the “candy sticks” aka candy cigarettes. Yeah you looked cool sucking the edges so it look like a joint. Man I was such a tool. (and a total straight lace kid to boot so I have no idea why I thought it was so cool)

I must say that the UBER expensive bags of “all-natural, organic, holier than thou” candies I saw this weekend at the Whole Foods made me laugh.

Sure — buy it for your own kids, but are you really gone spend $50 on healthified candy to throw into the bags of kids who are gonna go home and eat the rest of their candy and wake up to a breakfast of Cinnamon Toast Crunch?

I just….didn’t get it. It was TOO pricey.

I give out all my favorites, which means that either the kids get no candy or I have to make an emergency run, because I’ve managed to grab a piece each time I walk by the bowl.

Ha, we don’t even really celebrate (is celebrate the right word? Probably not.) Halloween in Australia but this post still had me laughing

Thank heavens I only have Easter to tempt me with delicious chocolates!

Eww. Agreed. I would just toss those in the trash. Along with Smarties and those nasty strawberry hard candies in the wrappers that look like strawberries. Gross.

Wow. My friends and I used to pretend that smarties were medicine and we’d administer our “pills.” This was….probably pre pre-school. Interesting foreshadowing…

Haha! I remember taking medicine that tasted better than Smarties. Who buys those and actually likes them? I would maybe buy them to give out at Halloween because if I bought mini Snickers and Milky Ways, I’d eat them myself. Are Smarties and Neccos the candies for smart consumers, avoiding temptation? Curious…

i would have loved getting pez as a kid!

but as a total nerd in school, i really liked getting random things like pencil caps..