Even though everyone complains they hate ads, you gotta hand it to them: they can be very persuasive. I’m fairly certain the Snuggies became popular thanks in large part to those hideous infomercials of the whole family looking like wizards cheering at an outdoor baseball game.

But ads can sometimes be misleading. Infact, as I was driving home from work listening to NPR today, I heard about the lawsuit against Reebok. Have you seen their ads for their “Easy Tone” shoes? 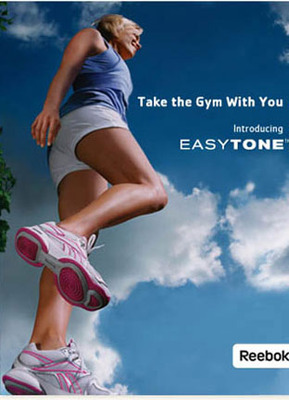 Ads for Reebok’s shoes bragged that lab tests  proved the sole’s “special design” would help lead to an ass you could bounce quarters off of. Or some shit like that.

But in reality, the lab tests didn’t show that the shoes would improve muscle tone. So Reebok was forced to refund 25 million bucks. Enough money to get you multiple liposuctions, personal trainers, and butt implants.

Anyhow, I thought I’d come up with other examples of “false advertising”:

1) Tampon commercials:  I don’t want to twirl or spin in circles on my period. I mainly just want to curl up in a ball & cry.

2) “English Breakfast” Tea: tastes nothing like crumpets or beans on toast

3) The Movie, “The Breakfast Club”:  Very little of movie dealt w clubbing bowls of cereal….or oatmeal for all you healthy bloggers out there.

4) Heirloom Tomatoes: A while back I bought some heirloom tomatoes to pass along to my grand kids someday. They didn’t even last the month.

5) “Chocolate Labs”: Nope. I saw one at the park the other day and it didn’t taste ANYTHING like chocolate.

8 ) GPS: Well, at least every time I use it I get lost. Plus, I think my GPS is homophobic cause it usually likes to yell at me to “stay straight!”.

9) Me: I’m very disappointing in real life. I’m so lonely and boring, that when I banged my elbow on the kitchen counter I told everyone it was a heroic “sex injury”.

Truth is, there’s no one to tell.

Give me some of your examples of false advertising. Any gadgets you’ve used that totally did NOT do what the ads promised?

You know what else is false advertising?

Finding proof in pudding! Well, at least this pudding.

But at least all you can make it in an instant using a microwave!

(makes 1 serving but I would double the recipe to be honest, this was more like a “mini snack” serving)

Put the cornstarch and sweetener into a microwave safe dish. Slowly add the milk, lemon juice, and extracts.  Stir well with with a whisk or a fork.

Microwave on high power for about 45 seconds. Stir really well and return to the microwave for 15 seconds, stir, and repeat until mixture comes to a boil. Watch it carefully to make sure it does not boil over the sides. Once it reaches a boil, give it about 20 more seconds but stop the microwave if it starts to boil over. Stir well, and pour into a serving dish. You can serve it hot or chill it in the fridge.

But at least its pudding.

I love this post. Heirloom tomatoes! Hahahahaha! Chocolate Lab!!! Tee-Hee-Hee-Hee! Love it. The last one – however – is hard to like…I don’t know if you are being super self-depreciating in a funny way or if there is cause for concern. I hope you were just being funny…because it saddens me to think of you as feeling like you are less than what you are in my and others’ eyes. And stop it. People adore you! No crying in mirrors after showers to make hunger go away, (was that a joke too?) and no more hating on yourself! Gabeesh?

my GPS lies to me too. at least I know enough to NOT go south on the freeway when I know I need to be going north, but… I also know enough to know … that I don’t know where I am going and now I’m screwed. dang GPS.

heirloom tomatoes – tee hee! I always think the same thing – and they are often expensive enough to want to include in your will.

My GPS freaked out the other morning and kept telling me to make right and left turns when I was on the highway. It was asking me to make turns onto non-existent roads, when turning would have put me in the median or the ditch!!

I love all late night fitness machine ads. Those are absolutely ridiculous!! There was one that you sit on to help you do lunges, and another that you rotate around for abs. Even if they worked, why would I buy a machine good for just that one thing? And, by the way, make myself look ridiculous? (See horse riding machine ab exercise.)

In Canada we have a chain of grocery stores called “No Frills”. I happen to stumble upon frills there all the time.

the tampon commercial totally lies! i was just thinking about this the other day (while i was curled up in a ball, cursing the world). and that trident layers gum…i so wish that was true

True that to the Facebook profile pictures! Several years ago prior to freshman year of college, everyone added each other in the class of 2011 group, and when we all met in person…well, lets just say I didn’t recognize as many people as I ‘should have’
Other false advertising:
-Apple/Fig/Mango butter…what apparently there’s no butter involved?! I guess nut butters is the same thing
-Victoria’s Secret 2 cup size boosting push-up bras…i’ll keep it at that
-That all Swedish girls are blonde. I know this, I’m part Swedish and am always in Sweden…most of them are just more natural looking fake blondes

Yes, my dad’s good friend is swedish and he’s tan and dark haired. I think nut butters get a pass cause they are creamy and “buttery” and “fatty” but apple butter is just mashed fruit!

I think all these ads for losing weight products are really ridiculous. Specially the “before” and “after” photo shots where you can’t even see the girl’s face and you could say from 1km away that is not the same person :S

they ARE completely fake. I know a blogger who has before and after photos on her blog, from weight loss, and they were TAKEN and used on one of those weight loss product websites… until she told them to take it down. her photo was used, with a fake name “so and so” lost x amount of weight using x product” and “hear her story”.

lame. and sad that people spend WAY TOO MUCH on that crap.

Heirloom tomatoes…lol.
(im putting this in parenthesis because i’m ashamed of it, but i bought a pair of those shoes. in my defense, they were on clearance, $30. they are now my mowing shoes)

Dont be ashamed! Call the company! they’ll give you your money back!

Um…every online dating profile I’ve come across. Men need to stop saying they’re 6′ when they’re 5’5″. Do they think we aren’t going to notice?!

LOL! Not just a sex injury…but a HEROIC one!

yep. I saved the erection.

Kashi is also being sued for not using processed and synthetic ingredients yet they claim “all natural”. The GoLean shakes are made mostly of synthetic ingredients (like Sodium Molybdate, xanthan gum & yeast extract).
One product I used and was disappointed was that “Head-On” applied directly to the forehead. I hated the commercial but someone gave it to me. Totally useless. Made my forehead warm and a little tingly – but I might as well have put Bengay on it! I know there are more but its been an awful day and I can’t think!
The lemon pudding pics are so pretty – just like the beauty taking the pics

wow – I hadn’t heard that about Kashi, but I’m glad I don’t eat it.

I LOVED the Head On! those commercials were enough to GIVE me a headache, but for me it worked… topicals are my first try, I use Biofreeze for headaches often. forgot all about Head On

Glad to hear it worked for someone! The commercials were so repetitive and got stuck in my head (like now) and that’s why they drove me nuts!

That lemon pudding sounds yummy. I love lemon desserts….and NPR! About half my conversations begin with, “I was listening to NPR and…”

Onto false advertising, all those workout infomericals are bologna! I knew a girl who was in good shape and modeled and one of those BeachBody workouts hired her to gain 20 lbs, then complete the program to lose the weight, along with providing a nutritionist. So she did lose the weight on the program, but it was weight that wasn’t normally on her anyway and she had aides to help (

Anyone get the South Park reference?)

99% of my conversations begin with “I was listening to NPR….”

So much false advertising out there. “Times Square” could count because it’s not really a square, and it’s a major Time Suck due to the superfluity of meandering tourists. But I like your examples better!

Pretty much anything you have to buy by calling in and ordering, or that people have parties to sell is a bunch of crap and full of false advertising.

When I’m back home I’ll be making this pudding and yes, probably doubling the recipe- purrrty photos.

This whole post made me LOL. Yes, almond milk is false advertising. Paige cracked me up with the almond teet.

Much as I try to believe it, PB2 and peanut flour just isn’t PB and never will be. False advertising: sometimes I feel like that when I wear my padded bras

Lots of protein powders have these great names like Chocolate dusted chocolate chip reese’s heaven and nope, never tastes like that. Zucchini bread: LIE! it’s cake! it’s zucchini cake and will always be zucchini cake- no bread anywhere in sight.

And from someone who knows you IRL, #9 is false!