Last night was the 8th night of Hanukkah and it was a particularly hard day for me as my mother passed away on the eighth night 12 years ago.

But today, I’ll focus on the non-materialistic things; things that you can’t put in a trust or a will and that definitely don’t need a lawyer:

Both of my parents are to blame for this.

My thighs suffer the consequences.

I learned all my curse words from being in the backseat when my mother was driving in LA rush-hour traffic.

Yea, that shit rubbed off.

3) My Boobs (yes, I almost write “tits” because I’m terrible)

Obviously, my father had absolutely nothing to do with me inheriting some cleavage. Luckily, my dad wasn’t so fat that he sported moobs (man-boobs). But my mom had a bosom that was perfectly proportional to her body, just like me. Its like that porridge that Goldylocks from the Three Bears ate.

4) Ability to Be Outgoing

I totally got this from my mother as my dad wasn’t a total hermit, but he wasn’t the type to strike a conversation with anyone.

I pretty much will talk to anyone if I’m bored enough. Sometime, I hate that I’m like this because some people have trouble shutting up.

This one goes to my dad who’d pop a vein in his forehead if he were late.

I’m pretty much the same way.

And cue picture of a rabbit…

My mom takes full credit for this, as my dad was a math wiz.

Here’s an example of my math skills:

If Eden has seven oatmeal raisin cookies, how pissed off is she that they’re not chocolate chip? 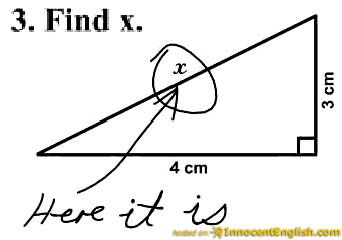 My dad used to be a pilot and my mom told me she always had a secret desire to be a flight attendant.

If I ever get super rich, I’m totally getting a plane.

My parents battled their cancers to the very bitter end. They didn’t give in so quickly, they fought a good fight and in many ways they won because their courage lives on within me. This is nowhere near fighting a disease, but after years of dreaming, I finally took the plunge and started doing stand up comedy.

Don’t get too excited, I’m not funny enough to quit my day job just yet.

But you’ve got have a shitton of courage to get up there and convince people you’re hilarious.

When I look back at this list, I notice that there’s actually many things that I didn’t get from either of them and that are all my own. And although its kinda cool these things I inherited continue to live on, I’m really glad there are things about me that are uniquely mine.

What did you inherit from your parents? Do you like/dislike what rubbed off?

I’m emotional like my mom. Sometimes, it’s a little embarassing. My sister has it too, so I connect the dots. From my dad; probably my sense of last minute planning, figuring that all will work out in the end. They usually do, but I like to be organized too. I’m totally feeling that clash in my personality. haha

Way to go about your comedy bit. Way more courageous then I will ever be just for that (apart from all you’ve been through in your life already). But then again, you ARE hillarious 😉

The best compliment I’ve ever gotten was a nurse once told me I had my mothers smile!

Aw, that is a great compliment!

Oh, I love this!
Envious of your 3, 4, 8! Come on who wouldn’t be?
We have in common 1, 6, 7. All inherited! Never missed math in my life anyways.
Me: tall like both of my parents, neat freak like mom, sense for fashion like dad – yeah, my dad is like the straight fashion guru. Kind of learned how to live with these. Ugh, well!
Thank you for brightening my Sunday.

Trust me, being outgoing has gotten me into trouble because of #2 😉

In terms if things I like that I inherited, I think I have my both and mom’s refusal to be anyone but who they are, and a love of reading.
Unfortunately I also got an ability to lose anything, and not be able to find it even if it is right in front of me….
I got a love of chocolate too-though that may just be part of being a human;)

Unfortunately, I inherited my mom’s right brain – but not her boobs, and my dads thighs (yes, it IS as scary as it sounds) but not his left brain.

Short end of the stick? I think so.

This is just a personal opinion but I’d say you inherited your dad’s looks as well =) To my eyes you look like him. Oh well, not literally but you get the idea.
I inherited my dad’s madness for everything sweet!

Next post: Gift Ideas For People Who Are Hard To Buy For